a simple model of system longevity

The Risk-Capacity Model is a simple simulation of the survival of a system. The system might represent an organisation, market, nation, or Life on Earth. The four main variables the Risk-Capacity model are: 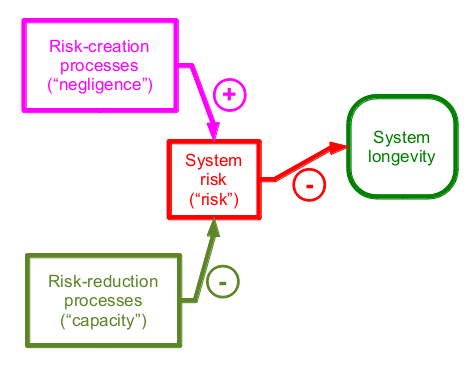 The core message of the model is: if the growth of risks exceeds our ability to reduce risks, then the expected lifespan of the system is short. 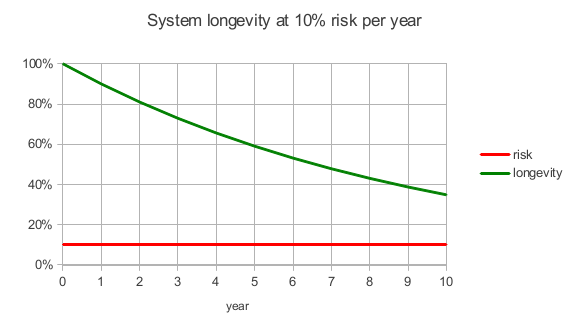 By the tenth year, there is less than a 40% chance that the system will have survived.

In this next model, the risk level starts at 10% as it did in the previous model, but now there is 1% capacity: 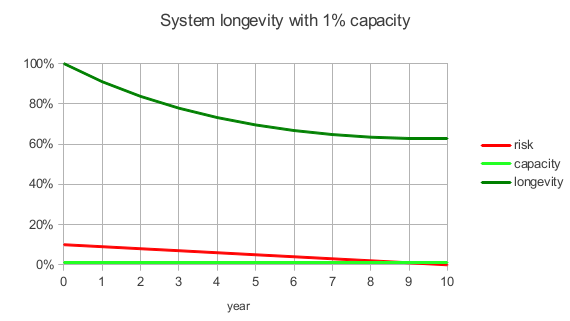 By the tenth year, all risk has been eliminated and the chance that the system survives has stabilised at about 60%.

In this next model, risk starts at 0, capacity is 10%, and there are periodic spikes of 30% negligence: 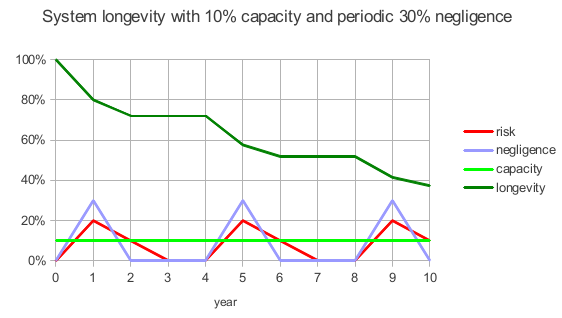 This system has a 40% chance of surviving ten years.

Details on using the Risk-Capacity Model for system simulations

All three variables — risk, capacity, and negligence — range from 0.0 to 1.0 each period. Capacity and negligence could either be constants or the result of a process (e.g. to simulate negligence that introduces in batches, such as the third example system above, or capacity that waxes and wanes over time).

The value of system longevity is equal to 100% minus the cumulative risk so far. Thus, each period, the new longevity is calculated by subtracting the risk level from the previous longevity:
longevity2 = longevity1 × (100% - risk)

When using the Risk-Capacity Model to present choices, the variable of risk cannot be directly altered. Instead, actors in the model can only be presented with choices regarding either of the two input processes, negligence or capacity. For example, you might simulate:

Other examples of model variations

You could also elaborate the capacity component of the model to have more sub-aspects, for example to simulate the need for risk assessment. Such a modification have two additional variables:Then each time period,In order to simulate an effect whereby new risks are not understood, simulate this every period:
Adding this to the Risk-Capacity model now lets you simulate two ways in which we might improve our capacity to reduce risk: either through risk assessment or capacity-building.

Typically, the risk to one context is lower than the risk to its enclosing context. However, the risk to the larger system is a hard limit to the risk of its subsystems.

For example, in a battleship at port, the risk to an individual sailor's life is due more to internal factors (i.e. heart disease), and self-care (risk reduction) activities consist of exercise and diet. When the ship is at war, the risk to the external system (the ship itself) exceeds risk from internal factors, and the sailor's survival depends more upon helping his entire unit survive.

To model this, one would decrease the percent chance of longevity by either the risk of the system or by the risk of its enclosing system, whichever is greater in that time period.